I Took My Employee With Me on Remote Year

Written by Laura Gallaher, an organizational psychologist who is traveling the world with Remote Year Kanyini. 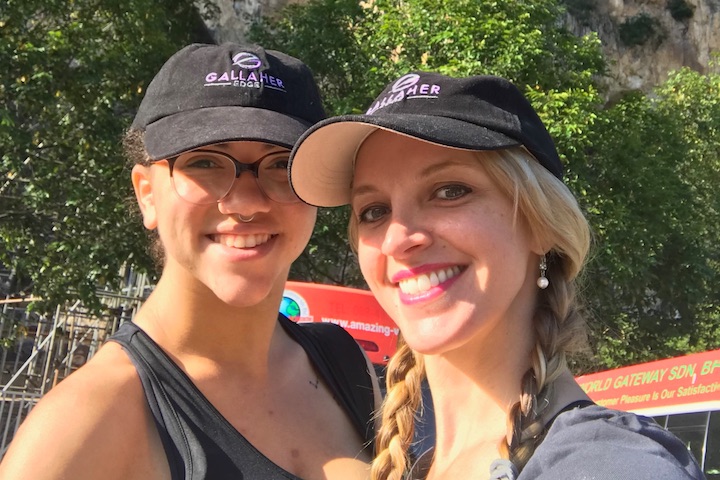 On September 10th 2017, Hurricane Irma was headed right for me. I sat down at my desk and opened an email from Lawrence from Remote Year. “Hey, are you safe? Do you need an extension on the deadline for your down payment?”

The deadline was September 12th.

I opened the payment link, completed the information, and hit submit. I sat back in my chair and felt a little smile crawl across my face. “I’m doing it,” I thought to myself.

Prior to that, Lawrence had shared with me that he normally gets into a lot of deep conversations with people, helping them think through the decision and understand the value of the experience. But I had already decided. Did I have questions? Of course. But were any of those answers going to change my mindset of having this experience? Nope.

When I hit my 30’s, I found myself regretting that I never took advantage of a study abroad program during college. I studied Spanish, and was nearly fluent, and if I immersed myself in the language, it might have really cemented that fluency. But I didn’t do it then. I wasn’t interested then. And then I had a moment where I realized that I was caught right in the middle of a fixed mindset belief.

“Wait a minute,” I thought to myself. “Why am I acting like it is too late??” The “aha” moment hit me – I can still live outside this country – what’s stopping me??

Well, I allowed a few things (jobs, relationships, mindset, uncertainty) to stop me for a few years.

I was working for NASA when I realized I wanted a new experience, helping them change the culture at Kennedy Space Center after the Space Shuttle Columbia tragedy in 2003. Then I worked for The Walt Disney Company for awhile. And 5 years ago, I started my own company, Gallaher Edge, to help executive teams get their competitive edge by developing from the inside out.

There was always a reason to not go. “I’m just getting started.” “I have this great network now.” “I have multiple contracts to fulfill this year.”

But once 2017 hit, I was determined. A friend told me about Remote Year, and within a couple weeks I applied and was interviewing with Lawrence. I started making choices in the beginning of 2017 to position myself to make this experience my reality.

Why is it so important to me? I am an Organizational Psychologist who is passionate about helping people become more self-aware, more productive and more fulfilled with life. I know that my own journey to self-awareness is a critical and foundational piece of how I help others grow, and that my self-awareness journey would benefit from….well, a literal journey.

What better way to get to know myself than by placing myself in multiple situations with unknown variables, uncertainty, unfamiliarity? Exposing myself to new societies, new cultures, different ways of thinking and behaving – that’s incredibly powerful for growth!

And then came one more reason “not to.” I hired Kayla in April as my personal and executive assistant - my total right-hand woman.

Hiring her changed my life. Yet I was determined to have this experience. She knew about my plans to move abroad. I was very intentional about letting her know that I really wanted to keep her onboard as an employee, and that even though I was leaving the country, we would figure out how to continue to make it work – if she wanted to.

But only a month later I committed to Remote Year, between the only vacation she took for herself last year and a work trip for me. We found ourselves apart for over a week – and we both felt like we were going through withdrawals!

When we were again sitting side by side in my home office, we talked about how much better it was when we were together, and we started to feel sad about being separated while I traveled the world. The idea had occurred to me before, but I made so many assumptions that I hadn’t said it out loud - until that moment.

“Is Remote Year something you would be interested in doing with me?” I asked, tentatively.

“Whoa” I laughed. “Okay…well I don’t know how that could work yet, but if you want to come along, I would love to figure out how we can make it happen.”

Kayla immediately applied, interviewed with Lawrence, and in a follow up call with him stated: “Yeah, we’re pretty sure it’s happening…Laura and I just have to have another conversation about finances.” Her mindset? Sold.

So why did I decide not only to invest in myself by travelling around the world, but also to bring my one and only W2 employee with me?

Well first of all, she’s phenomenal. Hiring her changed my life, and I already feel so indebted to her. When I found out that she wanted to be a part of the experience, I was so motivated to find a way to make it work. There are so many reasons to say no, but I focused instead on the reasons to yes: