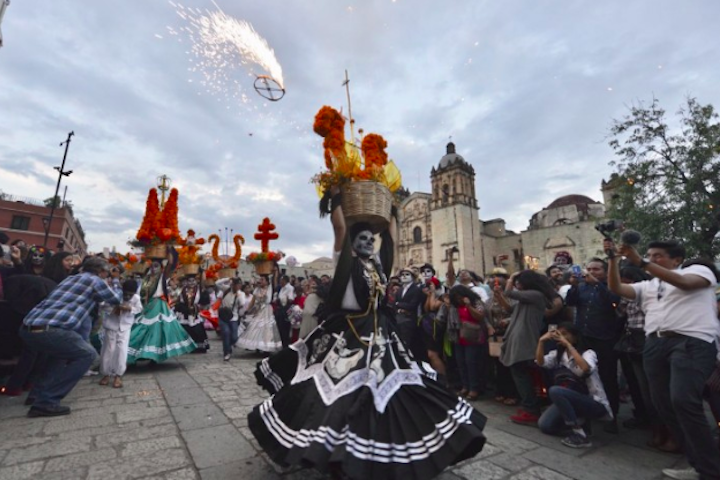 Sofia Provencio is a Remote Year Experience Manager in Mexico City, Mexico. Experience Managers curate unique, local Tracks™ events and provide local tips to Remotes (Remote Year participants). Sofia was born in San Miguel de Allende, but has lived on multiple continents before moving to Mexico City. She enjoys exploring different cultures and traditions around the world. In this piece, she shares her local perspective on how Día de los Muertos, or Day of the Dead in English, is celebrated in her home country.‍

Mexico’s Perspective On Life and Death‍

Fact: no matter where you’re from or how you live your life, your time on Earth is limited. The pre-Hispanic cultures of Mexico believed that death is as much a part of life as birth, and should be accepted and approached with positivity rather than fear. In essence, we celebrate life through death. This is the core truth behind the tradition of Día de los Muertos.‍

On Día de los Muertos, those that have parted come back to be honored.  Some people mistakenly think of it as a Mexican version of Halloween, but Day of the Dead is a complete contrast. While Halloween has a dark and scary tone, Día de los Muertos is colorful, joyous, and a celebration of the dead. Ofrendas, or altars, are erected in honor of the deceased person filled with items that they liked to eat, drink, watch, and read. Most of the time, other traditional elements are added, such as candles to light the way and Cempasuchil, also known as Mexican Marigold, an orange seasonal flower with a particular smell that is believed to attract the dead. In local cemeteries, families gather around the tombstones of their relatives and spend the night chatting, drinking, and enjoying each other’s company.

The festivity has been traced back to Aztec times when it was originally celebrated on the 9th month of the Aztec calendar, currently early August, and the celebrations lasted for more than 20 days. Nowadays, Día de los Muertos is celebrated on both the 1st and the 2nd of November. The 1st is dedicated to “los angelitos”, the little angels, also known as Día de los Santos Inocentes. It is believed that on this day the souls of young children that have passed away come back to visit their family and friends. The 2nd is “All Souls day” or the official Day of the Dead, and is dedicated to adults. Today, Día de Muertos is mainly celebrated in the center and southern states of Mexico with most of the popular traditional festivals happening in Michoacán and Oaxaca. While Mexico is the birthplace of Día de los Muertos, it has now been adopted by many other countries in Latin America and the world.‍

How Remote Year Is Celebrating Life Through Death‍

This week Remote Year is celebrating this magical tradition in the cultural heart of Mexico, Oaxaca. Many current and past participants of Remote Year, staff, and extended family and friends will descend on the beautiful city of Oaxaca for a 4-day Remote Year-guided journey to explore cemeteries, calendas (parades), traditional foods for the holiday such as the typical skull candy, candle workshops, amazing restaurants, and mezcalerías. It will be a trip full of celebration to cherish the fact that we are here on earth, alive and surrounded by color and joy.