Vanesa Cotlar, a Management Consultant who is traveling the world with Remote Year Kanyini, shares the story of her experience at Remote Year's #Unplugged Nation House. 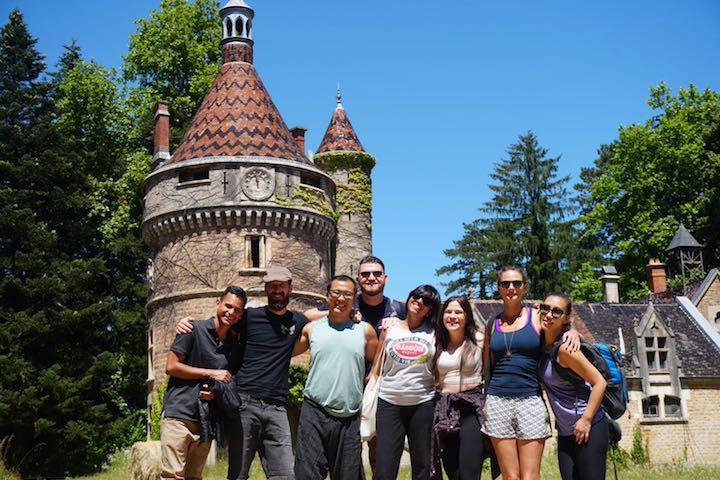 As the group sat down for dinner, Travis, Remote Year’s Community Development and Strategy Lead, said: "You have three minutes. Three minutes to do anything you need to do before we put the phones away." Envision 15 individuals from different Remote Year groups frantically messaging on WhatsApp, making video calls to loved ones, checking Instagram and Facebook and, when the time is up, handing their phones over. Here we go. A whole weekend #unplugged.

Every year, Remote Year hosts Nation Houses  focused on topics to promote personal growth and professional development. Nation Houses are open to to anyone currently traveling with a Remote Year group as well as Remote Year Citizens (those whose programs have already finished). Remote Year takes care of the logistics, including venue, food, and beverage, while the participants are responsible for planning all of the sessions for the weekend.

Ours was the first to exclude technology. To enable us to truly disconnect, our weekend was hosted in an incredibly beautiful, and somewhat secluded chateau in Macon, France. The property we stayed at was owned by an inspiring woman named Jess, who moved into the Chateau three years ago to restore it. The property has been in her family since 1850, but was left abandoned for a period of time. She decided it would be the perfect place to host groups with purpose, and we were lucky enough to be one of her firsts.

Once the phones were put away and dinner started, we could not help but take in our surroundings, eating under the stars, enjoying uninterrupted conversation. Our dinner table felt different without the lit up screens accompanying each place setting.

Phones can act as a safety blanket, used to distract you as you wait in line for a bathroom. When you sit down on a bus or train. When you put milk and sugar in your coffee. Your trusty sidekick is there to keep you from feeling obligated to speak with those around you, because you can just look down at your screen. At Nation House, 15 strangers sat down for dinner without these social crutches and continued to do so over and over again through four more meals and close to 10 sessions with no technology to act as a barrier. Over the course of 48 hours, 15 strangers became friends, partaking in meaningful group discussions and deep one-on-one conversations.

Post-dinner, we had our first session with Maggie, a Citizen who traveled with Remote Year Darien, where we went through a blind tasting of multiple foods. Many laughs were had as we learned how to blindfold ourselves like ninjas, attempting to figure out what we were eating. After the last combination,  goat cheese with spicy red pepper jelly, a few of us went in search of wood to make a fire. Night one was filled with rounds of "The Toast Game", where a topic is selected and each person in the group makes a toast to someone not present tied to the theme. We focused on people we missed at that moment and then favourite places. As we headed to bed, we noticed that none of us had alarms to wake us up. We were told not to worry, as Travis was confident his blasting of Lion King music would have us up in no time.

Falling asleep was different. With no screen to look at, my roommate Mario, an Ohana Remote, and I started talking about what we do currently and what we want to accomplish throughout our lives. A moment that would normally have been occupied by our cell phones, was instead filled with conversation. The room was dark, it was quiet, and closing my eyes, I drifted into sleep.

"Nants ingonyama bagithi baba…" Lion King came blasting boom-box-style on Travis's arm to our door. As promised, waking up would not be a problem. The Circle of Life continued playing as we headed down for breakfast and started our day. Our morning consisted of two sessions, the first focused on what it really means to unplug and how we feel about it, led by Deb from Remote Year Balboa, and the second on how much time we spend on our phones and how we can change our behaviour to do more of what we love, which I led. In the middle, Des, an Atlas Remote, led us through Acro Yoga, where we all learned how to fly together.

Lunch came quickly, with Jason from the Remote Year team and I making PB&Js for the group, and heading on a guided meditation hike led by Susanna, a member of Remote Year Ohana. We focused on different senses as we walked through a forest, discussing  our thoughts over a picnic lunch. Then came time for our afternoon sessions, where Paula of Remote Year Atlas led us through a group brainstorm on innovative ideas Remote Year can implement to better incorporate sustainability practices into programs. Then Mario led us through an introspective workshop focused on understanding the types of people we want to become and what is getting in the way.

After a quick coffee break, Ahi, a Kairos Remote, started teaching us how to make pizza and we began the two-hour long process. While we let our dough rise, Anu, a Remote Year Ikigai Citizen, led us through a game of capture the flag, which ended in more sprinting than most of us had done in years. Our evening consisted of a beautiful dinner in the chateau and an incredible bonfire; the largest I have personally ever seen. While we watched the flames, we shared stories of our lives on Remote Year and our lives back home. We had this overwhelming sense of appreciation for shared values and experiences, understanding each other's struggles and victories of being location independent workers.

As I headed to bed on night two, I had conflicting thoughts. A part of me was excited to look at my phone and reconnect with friends that I had not spoken to since Friday, but another part of me did not want the cell phone back at all.

Sunday morning.  After Charles, a Citizen from Remote Year Cousteau, taught a yoga class and Jen, another Citizen from Remote Year Libertatem, led us on a scavenger hunt, we all sat in a circle, ready to get our phones back. Just like on Friday night, we took three minutes, but this time, to see what we had missed while disconnected. I had a number of WhatsApp messages, some emails, a few Facebook and Instagram notifications, but nothing had really changed over the 48 hours. As we talked about what we saw on our phones, we realized no one had missed much, apart from an early labour call of a friend, who was now all right.

We simultaneously came to a massive realization: since we had our phones back, we had stopped fully paying attention.

As each individual was sharing their perspective, the other members of the group were staring down at their screens, continuing to catch up on the missed social media activity. This was the first time all weekend where we were not fully present. Having our phones back changed the dynamic, as for almost the entire time the group had known each other, technology did not exist. We decided to put the phones down, and continue spending a little more time together before parting ways. Although unrealistic to never look at our cell phones again (though some people wanted to!), we all decided to make a much more pointed effort to put our phones away whenever we are with others so we can give them our full attention.

So what happens when you put a group of 15 strangers in a remote location in France and take away their cell phones? Intense attention and connection, in a way that propels the development of friendship. Every break was filled with a casual conversation, taking time to speak to someone in the bathroom line, or while putting milk in coffee. Every moment becomes an opportunity for personal growth and creating a connection with others.

One of the quotes that resonated throughout the weekend was,  "life isn't about dying with the most likes." Although we all get this strange sense of satisfaction when we see others liking our pictures on Instagram or Facebook, the positive feeling we get from this is fleeting. For most of us, it is not a true moment of joy or excitement. This weekend, the unpublished experiences were ours to have, and that was enough.

For some people, joy was derived from running around like kids attempting to catch butterflies for a scavenger hunt, or the feeling of victory capturing an opposing team's flag during outdoor games. For others, it was sitting by the bonfire, watching the flames and reminiscing of old campfires before WiFi existed.

Throwing pizza dough in the air, waving our hands around because we just didn’t  care.

Losing sense of time, without feeling as if it was a crime.

Unplugging gave everyone an opportunity to find both individual and collective moments of joy and excitement, most of which would have been interrupted and experienced differently if a cell phone had been in hand.

As we all headed our own way, we all felt that disconnecting had truly allowed us to connect. Over the next few weeks, we all hope to bring some of our experiences home with us. For those reading this, I truly do encourage you to try to take an afternoon, where you leave your phone at home and go do something with family, friends, or alone. Go on a hike or a walk, to a beach or a pool, read a book or listen to some music on an old school device. Take some time to disconnect so you can have the opportunity to feel more connected.