Sean Tierney is on a Mission to Make You Location Independent

Sean Tierney, a Remote Year Darien Citizen, recently launched Nomad Podcast in the quest to make a location independent lifestyle a reality for professionals around the world. 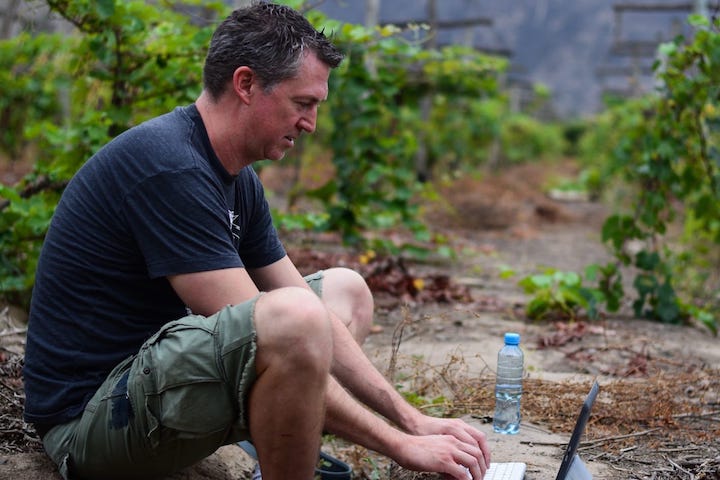 Transitioning to a location independent lifestyle has a profound effect on many Remote Year participants’ lives. In a world that too often tells us what rules we need to follow in order to be successful, we follow our guts instead. We feel inspired by our newfound freedom, using our autonomy to pursue the goals that have sat stagnant in the back of our minds.

Sean Tierney is someone who has profoundly felt this shift.

“I’m all in on this idea [of location independence]. I love Remote Year. I love the larger concept of transitioning to nomadic-style work,” Sean said. “It fundamentally got me out of a rut that I was in. It ejected me from this weird, stagnant era of my life, and now I have this whole new chapter. It’s been totally transformative.”

In 2016, Sean traveled the world for a year with Remote Year Darien, settling down in Lisbon, Portugal after his program  ended . Since then, he’s  continued to work full-time as the Director of Sales for Pagely and launched a few business ventures revolving around, you guessed it, promoting the location independent lifestyle he’s fallen in love with.

“These side projects are solving what I see as a two-part problem,” Sean said. “They’re educating people on the logistics side of how to work and travel, but they’re also inspiring people and getting them excited to want to take the leap. It’s a matter of getting people to move off the fence who were interested in location independence, but never pulled the trigger.”

One of those business ventures is a podcast called Nomad Podcast (iTunes link), where he digs deeper into the stories of people who are advocating for and pursuing a remote lifestyle.

“Podcasts have a unique way of going in-depth and capturing the human element that I think is sometimes lost in writing,” Sean said. “I wanted to be able to actually talk face-to-face with people, hear their stories, and ask them why they did the things they did.”

On Nomad Podcast, Sean interviews three different kinds of people: nomads, domain experts (those people who have interesting skill sets that Sean believes could be beneficial to nomads), and work and travel program founders.

The last category of guests was included because Sean acknowledges that work and travel programs are a part of the larger story of location independence. In his case, Remote Year played an integral role in helping him transition into remote work. Without the support that a work and travel program provides, many people would not feel comfortable enough to break out of their comfort zone and try out a completely new way of living.

“Remote Year awakened something in me and revitalized me in a really critical way,” Sean said. “It’s being faced everyday with little challenges that you don’t even know about until you get into places where you’ve never traveled. You’re forced to figure out how doors work in Prague and how to flush toilets in Bulgaria. Your mind is blown constantly in these little ways.”

So, who would be Sean’s dream guest for Nomad Podcast?

“I think the founder of Patagonia, Yvon Chouinard, would be fantastic,” Sean said. “I’ve read a couple interviews with him and he seems like such a principled human being. He lives what he preaches and integrates those policies into his company.”

From Remote Year to Becoming a Leading Voice for Location Independence‍

Though Sean had entrepreneurial tendencies before joining a work and travel program (he’d worked for a few startups in the past), there was something about the experience of being surrounded by a community of passionate, ambitious professionals that jump started his professional pursuit in a way that was different than what he had felt when he was working from one place on a regular basis.

“It’s not like a university course where you come out the other side with a degree,” Sean said. “It’s more like a platform where you can use it to launch new projects and teach something or learn something and connect with people.”

“More often than not a work and travel program screens out the “status quo” people and self-selects for  the people who are searching for more, striving to be better, and actually building things. Those are the people I want to hang out with anyways.”

“When you’re surrounded by all of these doers, people are getting shit done and you’re so inspired. When you get in that scenario it forces you to rise to their level and really up your game.”

“The best learning occurs over those late night conversations and meals - it doesn’t happen during networking events or conferences. Truly getting to know people is the best learning experience.”

It’s easy to see how Sean’s experience on Remote Year became the jumping off point for a larger personal mission of advocating for a location independent lifestyle. Through his nomading e-course, his travel blog aggregator and now his podcast, Sean has been able to bring this “fantasy” way of life into the real world, and encourage others to consider whether or not they should try it for themselves.

More often than not, Sean thinks the answer to that question should be yes.

Sean Tierney is the host of Nomad Podcast, founder of Nomad Prep, and a member of Remote Year Darien. For the 10th episode of Nomad Podcast, Sean will be bringing back the first nine guests on the show for an AMA session - and you’re invited! If you want to join the conversation, head to NomadPodcast.com and enter your email in the footer to get an invite to that AMA session.