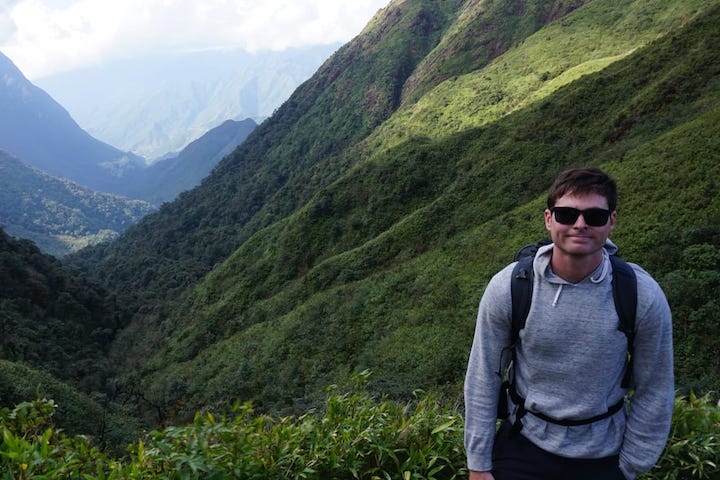 Why did you decide to come on Remote Year?

I think it’s because I’m more comfortable being outside of my comfort zone, if that makes sense. The idea just sounded so much more enticing than settling down, buying a place, and continuing to live for the weekends, which is what a lot of my friends were doing. I wanted to grow personally in bigger, bolder ways. That, and I have a serious fear of commitment when it comes to cities at this stage in my life.

Living in Chicago for the past three years had been great, but during my time there it became increasingly clear to me that traveling extensively to learn from new people and foreign cultures was something that I needed to do. And I knew that I wanted to do that now - not when I’m 65+, retired, with fake joints and questionable energy - but now. While most of us want to “travel” or “see the world”, few are able to make it happen for various reasons: many legitimate, some debatable. I pondered some excuses away and had previously worked up some sketchy plans to put the career thing on hold for a while, pack up, ship out, and explore South America indefinitely. The more I planned, the more I realized that while there are MANY benefits to that type of gallivanting, there were two major drawbacks, as I saw it: 1) an unstable income through various small jobs would be a constant concern and limitation, and 2) I would be all by my lonesome for most of the trip, and I know that good conversation and new relationships are major contributors to the enjoyment of travel.

Remote Year offered up an alternative to ease my concerns about solo travel and a platform seemingly legitimate enough for my professional colleagues to trust that I would be able seamlessly transition to a remote role abroad. I was sold right away, and it ended up being a no brainer.

What are you working on for the year?

I work in the education finance space. My colleagues at Afton Partners and I have been helping public schools and funders of education reform in the States with things like sustainability planning, operational efficiency and effectiveness, funding equity and transparency, and aligning resources to strategy. I have a finance background, so a lot of my time this year has been spent analyzing large data sets and building financial models in Microsoft Excel. Oftentimes I can jam on this type of work on my own time offline, which is nice for a remote gig. This year I’ve worked on multiple different projects including some fun ones with philanthropies looking for guidance on funding new, bold, innovative academic models.

How did you find yourself a remote role?

Relationships… and years of built trust. My current role is with the same firm that I’ve been with for three years now. Afton is small and nimble – we currently have seven employees living in five different cities. While I wasn’t previously working from beaches in Bali, I was either working at the client site or working remotely in the States. I’m incredibly fortunate to work for and with great people who understood that much of the work I was doing could be done from anywhere, assuming there is decent WiFi.

How do you think traveling will affect your current work?

Happy employees make productive employees, and I know that I've been both happier and no less productive in my role while traveling. I knew my role would shift slightly from a client facing one to more of a support role, but that was a conscious choice on my part.

What would you say to others looking to bring travel into their lives?

Do it for the Insta… Nah, I would say that you don’t know what you’re missing until you get out there, so get movin’. So much to see and so much to learn! The internet is your friend (Foursquare, Google Maps, Airbnb, etc.), and things will fall into place. Wander with patience and an open mind. Make connections and live like a local.

I would also quote my friend and fellow Remote Steph Walden who writes, “Travel is often difficult, uncomfortable and draining — but that's not a reason to throw in the towel. Because when the heartbreakingly beautiful, surreal, unimaginable experiences do happen, they're even more breathtaking in person than they look behind a carefully selected Instagram filter.”

Where does your passion for travel come from?

I think it comes from some combination of my fear of the mundane and my curiosity.

Tethering in general and strategic use of the mute button for calls - absolute game changers.

3 things you can't live without on the road?

Where's your favorite place on the globe?

KAM’S bar at the University of Illinois in Champaign… no, in all seriousness this question just isn’t fair, and I don’t like it one bit. Each spot has its unique appeal and charm, and that’s essentially why I’ve come to realize that I don’t think I can settle down or even sign a one-year-long lease any time soon. There have been tiny, quaint towns where you feel like you are able to intimately come to know each nook and cranny (ie. Cavtat), and there have been huge, bustling cities that you leave feeling you have much yet to explore (ie. Istanbul). There have been cities renowned for night life and partying (ie. Osaka), and there have been cities that are renowned for temple exploration and mediation (ie. Kyoto and Ubud). With something to love about each spot that I’ve been, I think that my answer to this question right now, in short, would have to be Bali, Indonesia. Bali offered the largest variety, and it’s where I was introduced to the ultimate freedom that is renting a scooter for just $3 USD per day. High hopes that I will find my favorite spot where I’m spending the first month after the program – Sayulita, Mexico.

"The purpose of life is to live it, to taste experience to the utmost, to reach out eagerly and without fear for newer and richer experience."

"Do you realize… that everyone you know someday will die? And instead saying all of your goodbyes, let them know you realize that life goes fast. It’s hard to make the good things last. You realize the sun doesn’t go down, it’s just an illusion caused by the world spinning ‘round."

That and pretty much the entire “This is Water” commencement speech by David Foster Wallace.

What's the most challenging part about being a digital nomad?

Weddings back home have become quite the predicament for me this year. It’s really tough to have to tell close friends that you won’t be able to fly in from another continent for their wedding day (or more importantly, for their bachelor party).

Who's the most interesting person you've met while traveling?

This year has been full of encounters with truly interesting folks, and there are fifty of them traveling alongside me every day. I’m always interested in the people who had plans to visit a particular place for a few days and end up staying there for a few years. I met Yvon Chouinard (rock climber / surfer / environmentalist / founder of Patagonia, Inc.) on a flight out of Chile, and it’s honestly hard to come across a more interesting person. I’m now reading his book, “Let My People Go Surfing”.

There isn’t a typical day. No routine, and that’s how I like it. I actually actively try to avoid being in the same spot twice if I can – so I’m on an anti-routine of sorts... Generally though, in most of the Asian countries I had a motor bike so I would pack a day bag, scoot to find breakfast and hop on email, work for a bit out of some café or at our provided workspace, then scoot to check out some local attraction or beach, then work for a bit more, then grab a dinner and drinks with friends, with a few beautiful interactions with locals sprinkled in here and there.

Who do you hope to be by the end of Remote Year?