Sisu is a Finnish term for having extraordinary courage and determination in the face of adversity. It is the ability to endure, persevere and grow. As Sisu Program Leaders, Rima and Aaron have said, it’s a truly powerful name. 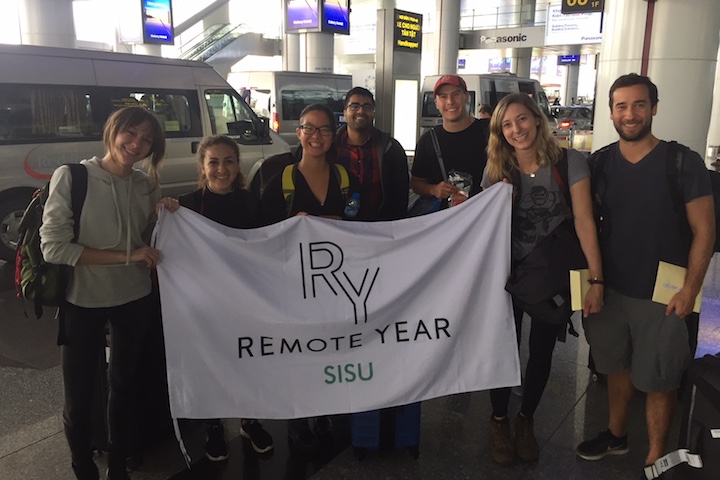 Every Remote Year program has its own unique name that is chosen to represent concept of global significance. Throughout the program, this name ends up defining the group of people who participate in the program - they rally around their namesake in good times and bad, and they feel a strong connection to this moniker that they’ve been given.

Remote Year’s latest program to launch in November 2017 is named Sisu. A Finnish term for having extraordinary courage and determination in the face of adversity, Sisu is the ability to endure, persevere and grow. As Sisu Program Leaders, Rima and Aaron have said, it’s a truly powerful name.

To kick off the first week, Sisu Remotes flocked to their first month’s home in Hanoi, Vietnam. Rima and Aaron had been preparing for their arrival for weeks and put in hours of planning to put together the perfect schedule of events for the Remotes’ first days in this iconic city.

Upon the Remotes’ arrivals, Rima and Aaron met them at the airport and welcomed them to Hanoi with a familiar face. Then, after making sure each new Remote got to their apartment safe and sound, the Sisu program celebrated with a round of welcome drinks - their first in Hanoi!

Later on in the week, Rima and Aaron sat down with the Remotes to review all the events that would be hosted throughout the week and also covered logistics and operational procedures. Remotes were introduced to the Remote Year City Team in Hanoi and were given tips on how to navigate their first month in this new city.

What’s the best part of Hanoi so far? “It’s a wild city,” said Jon and Zoe, a couple that is participating in Remote Year together. There’s just so much going on. It’s a very busy city. Tons of people, tons of traffic. In general, I think in Vietnam and Southeast Asia, the rate at which it’s developing, whether it’s construction or technology or commerce, it’s exponential. It’s cool to be here during the growth.”

Orientation was another opportunity to give Sisu Remotes a complete rundown on what the next year would entail. Rima and Aaron led activities to help everyone get to know each other, and developed platforms through which Sisu Remotes would be able to reflect on their goals and hopes for the year.

“I’m working on a few personal goals, but the most important to me is to lose my sense of defensiveness and my critical nature,” said Patrick Cason, another member of Remote Year Sisu. “I’d like to work on talking less and listening more, but without the intention of replying immediately.

“What I would like to do in each city is try to strike a good balance between experiencing the city as a tourist, so checking out the sites, the main attractions, and also living in the city as a local, because we are in the city for a month which is long enough to get settled and to get a real flavor of the city as a resident, not just as a tourist,” said Jon.

Once Sisu Remotes had gone through orientation, Rima and Aaron took them through the streets of their new home city to a traditional Hanoian Bia How spot, where they were able to experience the city’s culture firsthand.

Patrick didn’t have any trouble getting acquainted with the hustle of Hanoi. “I thrive in those environments, so I feel totally fine,” he said. “I tend to be braver than many travelers, so I started feeling comfortable in Vietnam in about a day or so.”

Over the course of the next year, Sisu Remotes will travel around the world, in Chiang Mai, Thailand one month and Kuala Lumpur, Malaysia the next. They will become immersed in new cultures and connect with each other on a deeper level, all while remaining productive in the jobs that they love.

“I’m proud of us so far,” said Jon. “We have managed to really take advantage of being in Hanoi and being a part of the program. We’ve taken advantage of all of the resources that Remote Year provides, whether it’s our program leaders or the local City Team.”

“I’m just so happy with our life right now,” said Zoe. “I can’t believe that this isn’t a vacation - this is our life now.”